The Differences Between Borderline Personality Disorder and Bipolar Disorder 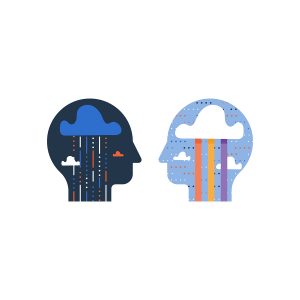 Mental illnesses can be complex and difficult to diagnose, especially when they share similar symptoms to other illnesses. Borderline personality disorder and bipolar disorder are often confused because they have some similar clinical features. The two illnesses also frequently co-occur which can make it even more challenging to get an accurate diagnosis.

Borderline personality disorder or BPD is characterized by impulsivity, unstable relationships, cognitive problems and affective disturbance. People with bipolar disorder can also be impulsive and show psychotic symptoms as well as mood disturbances. The two problems are related and often misdiagnosed as psychiatrists may mistake one for the other.

One of the major differences between BPD and bipolar disorder is the length of time in which mood changes occur. Mood swings can be short lived for people with BPD, often lasting only a few hours at a time and they are normally in reaction to an environmental stressor. Someone with bipolar disorder on the other hand will experience mood disturbances that last weeks or even months and the moods will occur out of the blue.

People with BPD also tend to have more feelings of worthlessness and fears of abandonment that may be less common in bipolar disorder. People who are bipolar can often have an inflated sense of self-esteem due to their manic episodes which make them elated and grandiose. People with BPD also see their problems with relationships as the source of their suffering while those with bipolar disorder will see them as a consequence of their behavior.

Both disorders can lead the individual to consider and often attempt suicide or self-harm. It is important for a person to take time to get an accurate diagnosis so that they can get proper treatment for either their borderline personality disorder symptoms or their bipolar disorder.