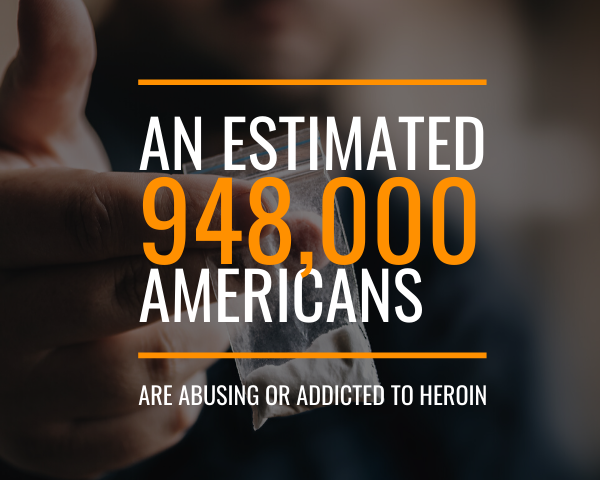 Heroin is an illegal drug in the United States but remains popular for recreational use. Today, an estimated 948,000 Americans are abusing or addicted to heroin. Heroin was banned in the United States in 1970 in the Controlled Substances Act. Today, as the opioid crisis rises and legislation reduces access to prescription opioids, many people with addiction to prescription pain pills move on to heroin. In fact, an estimated 80% of all individuals with a heroin addiction moved to the drug from a prescription opioid, and an estimated 3-8% of all individuals abusing prescription drugs will eventually move to heroin. At the same time, heroin presents more risks than prescription drugs, with risks of chemical pollutants, increased risk of overdose, increased risk of crime and violence, and increased risk of disease on top of the deleterious mental and physical effects of drug abuse. If your loved one is abusing heroin, it’s critical to get them help.

The Gooden Center’s Pasadena rehab center for heroin use offers a safe, comfortable environment to seek that help.

Our heroin rehab program is fully science-based, focusing on behavioral therapy and group counseling, with complementary therapies to help individuals improve habits, behaviors, and mental and physical health. We offer a home away from home, safe from the storm of social pressure and responsibility, where patients can focus on recovery.

Heroin is an opioid drug with a range of symptoms causing physical and mental side effects. Many users will act intensely high or stoned when taking the drug, may be completely “out of it”, and may completely change their behavior and personality over the course of their addiction.

Drug paraphernalia is a strong indicator that someone is using heroin. Because heroin is illegal, it is highly unlikely that anyone can access or use heroin regularly without having a problem.

Heroin typically has relatively mild physical side effects when compared to amphetamines or another stimulant. However, you can look for many physical symptoms: 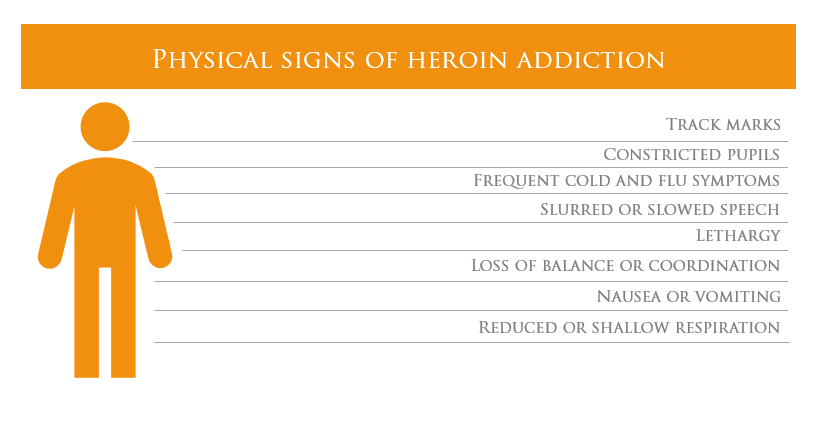 Most people will eventually begin to show mental signs of addiction, especially in terms of behavior, prioritization, and drug seeking. 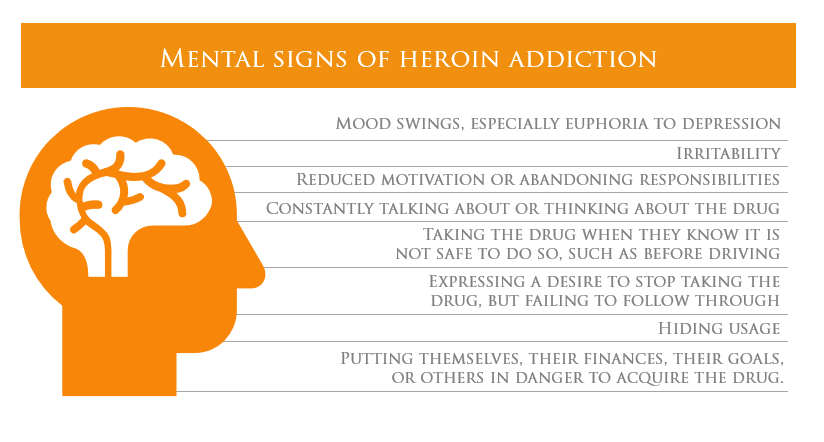 Heroin is illegal. Anyone who is using it is breaking the law. They are putting themselves, their family, their goals, and their career or education at risk. U.S. law only protects you if you seek out rehab treatment before being “found out”, caught in an illicit act, or arrested. It’s critical that you act quickly to get your loved one into care.

Heroin withdrawal is the process of the body re-adjusting to not having heroin in the system, which is a natural process following tolerance and chemical dependence. Withdrawal lasts about 14 days for most individuals and while relatively safe for most individuals, can be difficult and dangerous. It’s critical to seek out medical advice and monitoring to ensure your or the safety of your loved one during withdrawal. 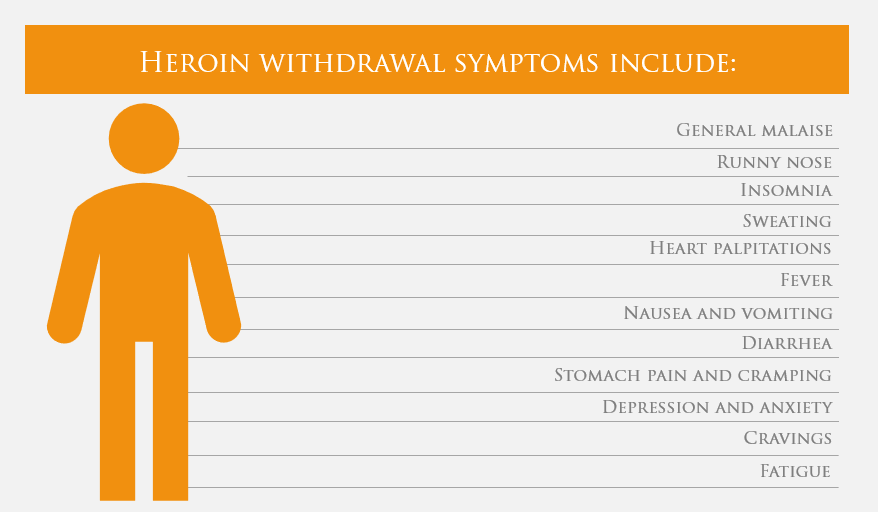 Early Withdrawal – Early withdrawal begins 6-12 hours after the final dose and last 1-4 days. Here, symptoms include mild anxiety and cravings.
Withdrawal – Full withdrawal kicks in 1-4 days following the final dose and may feel like a case of the flu. In extreme cases, individuals will experience extreme anxiety, panic attacks, suicidal ideation, tremors, and muscle spasms. These may require medical attention.
Tapering – Symptoms begin to taper off after about 5 days and typically vanish after 14-15 days.

These symptoms can range from mild to very intense depending on the individual, their metabolism, weight, genetics, and length and volume of abuse. It’s difficult to predict who will experience dangerous symptoms upfront, so medical monitoring may be necessary. 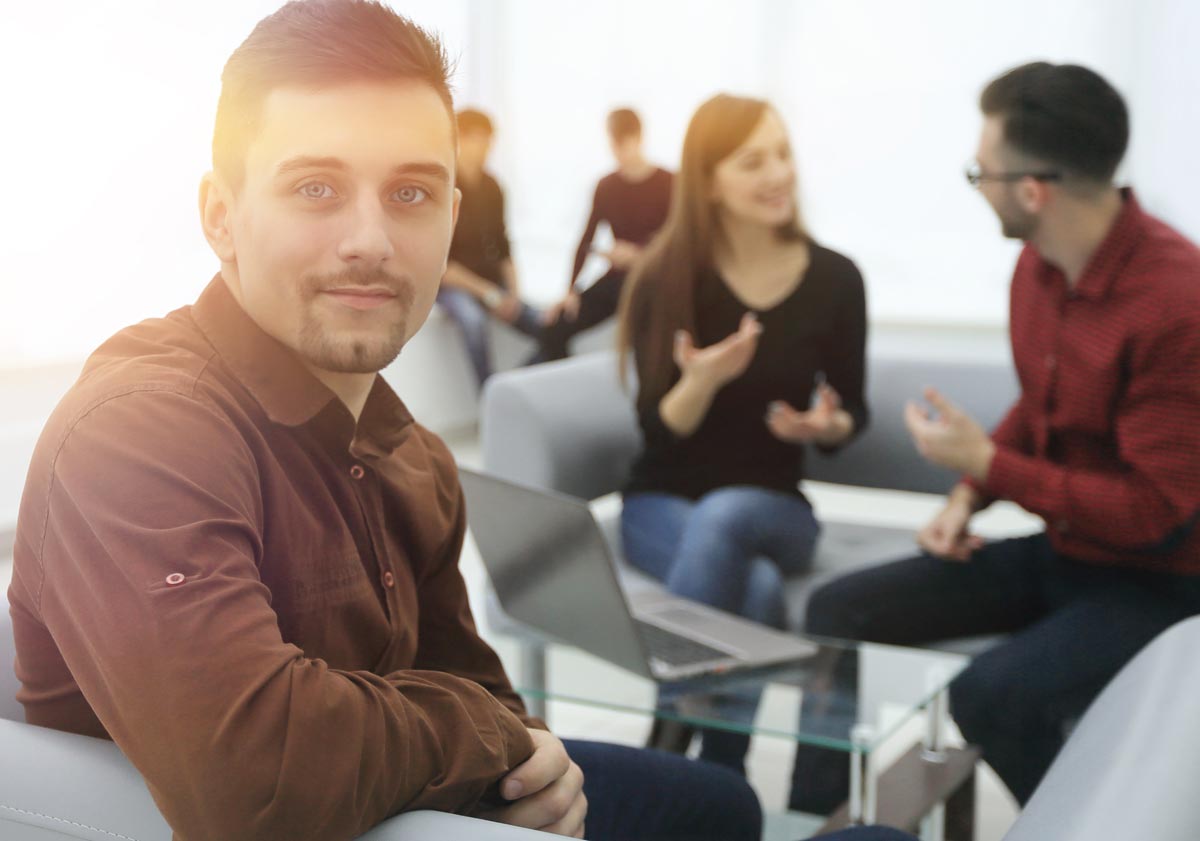 Heroin addiction comprises the first stage of physical dependence. Most individuals attempting to quit can relatively easily make it past this stage and 14 days of withdrawal symptoms on their own. Most also relapse as they face behavioral addiction on their own. Getting treatment at this stage is important for improving outcomes in long-term recovery. The Gooden Center offers heroin addiction treatment in Los Angeles and Pasadena, with a focus on mental health and behavioral therapy, using science-backed methods to help individuals heal, mentally and physically, from drug addiction.

No one chooses to become addicted to heroin, but a program of behavioral therapy can help you to tackle underlying issues that resulted in it.

Our strong aftercare programs can help you stay on track for years following graduating the program. And, as a non-profit, we do everything to ensure you get the best care possible with full support from insurance programs.

The Gooden Center is here to help. Contact us to learn more.